One of the 400 babies, Delilha was rocketed to another planet where she was found by a local villager. Raised and taught blacksmithing at a very early age, she was given the task of making a delivery for the first time at the age of 6. However, she fell into a nearby river during a storm, plunging through a portal into our world. Found by Matsumi and learning her true origin, she was taken to Euri, who while at first not pleased with the reality of the young girl (she felt she had been cheated out of raising one of her own flesh and blood) soon warmed up to her and treated her with the same love a mother has for any child. 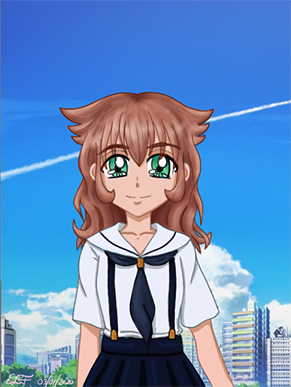 Wanting to keep her children safe, Euri chose to move both Hachi and Delilha to Academy City, a large scale self contained education facility which specialized in those with special abilities or "espers". While Hachi flourished in this environment, Delilha struggled badly, partially due to her apparent lack of powers. She only had two friends at this time: Jun, a girl who like her showed little potential in abilities and a young boy who while he did have a greater amount of power, still was kind to the two girls. Unknown to her, however, teachers at the school she attended began to notice strange occurrences around the girl and under the excuse of being extra lessons, performed several experiments on the child over the course of her time at the school. By the time she was 11, they had come to the conclusion that she had within her some unknown power and going to both Matsumi and Euri, asked for them to hand her over for further experiments, even to the point of it being suggested she be dissected, with a promise of monetary compensation to make up for their loss. Disgusted and horrified by the idea, Euri pulled Delilha immediately out of the school system and left Academy City with her, only choosing to allow Hachi to remain due to the girl's insistence and the realization she would be far safer at Academy City compared to her older sister.

Joining her sisters, Delilha moved with Euri out of Acadamy City, a place she had known for several years, joining her mother as they moved back Tokyo. She has also gotten more used to the modern world, though she has also clung to her past in her interest in horses and blacksmith work.

Getting ready to sign up for middle school, Delilha has also made friends with Kaifuu Aoi, also known as Sailor Triton. Unknown to her, Kaifuu has other plans for the young girl, ones which will change her future forever. Eventually, after several adventures, Kaifuu chose Delilah to become her successor to the title and in a large ceremony, became a sailor senshi like her mothers. She currently is working to be a good leader to the other Neptune satellite senshi.

One day at High School, Delilah finds herself stalked by one of her classmates, something which leaves her extremely unnerved. Eventually, after the girl follows her home and being confronted by Delilha and her sister Hachi, the girl, Hikari Kato, reveals herself to be a newly awoken senshi, Sailor Sycorax, though she is accidently launched into the air following the encounter. Hikari continues to hound the older girl, asking for her to train her in how to be a sailor senshi. After a week or so, Delilah finally seems to lose the girl's attention, only for her to show up once more at The Hotel, this time telling Delilha about how she discovered another senshi at the school. Leading her to a small house, Delilah meets Kumiko Kasuga, a spooky girl obsessed with the occult and in actuality also Sailor Themisto. While the girl is far less outgoing than Hikari, Kumiko also wants to learn how to be a sailor senshi. While Delilah doesn't feel she's up to the task, she finally is worn down by Hikari's insistence and eventually opens a new club at school, allowing them to work together as a small team while at the same time getting to know each other better.