December 14th, 1996, after her older sister Mio had been begging for weeks to be allowed to go, Shio-Mama, Mio, and 12 year old Kizoku traveled to Tokyo to see the final Farewell Concert of The Three Lights.

Sailor Europa would often create a sword of ice to use whilst fighting. Each time she used it, its make up of interlocking lattices of glass-like ice would always be different, unique, and incredibly strong and versatile. She would style the sword based on the style of swordplay she'd be using.

Birth of a Daughter

A Second Daughter From An Unexpected Source

During a certain month in the year of 2011, Delilha Gelus came into Euri's life. While both Matsumi and Euri were confused on how she could possibly be their daughter, they soon accepted the seven year old into their lives. It would only be in 2012 that they would learn about the 400 project and the girl's true origins.

February 4th, 2014 - Euri retires, citing wanting to spend more time with her family and take them out of harm's way.

In February of 2014, Euri took Hachi and Delilha and moved them of them to Academy City after having filled out all the necessary paperwork.

With Hachi and Delilha going to the prestigious Matsuume Elementary School in District 13, Euri applied for and got a position as a drama teacher at Sakugawa Middle school.

Euri resided in District 8, which has housing for most faculty and staff of the city. With special permission, Delilha was allowed to live with her.

A Son As Bright As The Sun

On August 26th, 2014, Euri adopted the Orphan named Nobu from the Cypress Park orphanage on behest of her daughters Hachi and Delilha. She then enrolled him in Higashifunahashi Kindergarten & Elementary School. 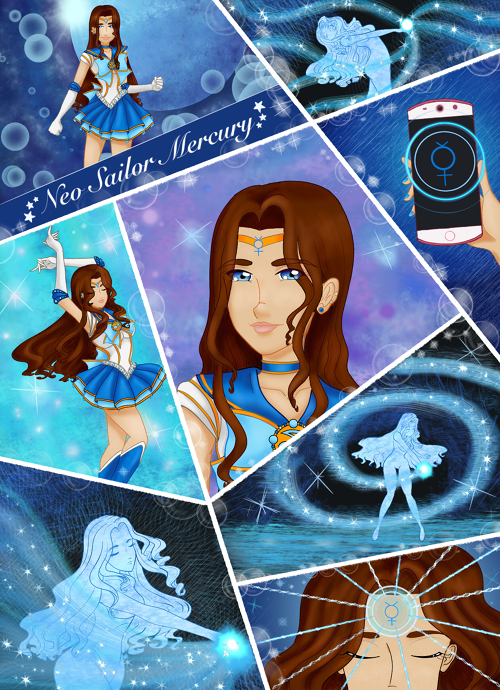 An ancient Mercurian weapon (sometimes known as the Frost Chain) which had been long abandoned when Mercury society took the path of science and reason. Due to it responding to a "passoniate emotional" soul in order to function, no Mercurian senshi had been able to use it till now. The God Hermes, though wise and quick, is far prone to swift trickery; this weapon is swift and tricky in its usage, preferring to ensnare opponents unexpectedly. It is a weapon that consists of an incredibly long metal chain with an extremely sharp dagger on one end and a very heavy circular loop on the other end.

Bestowed upon by Athena, Goddess of Wisdom, it is an Ice Aura. - This aura of cold, frosty mist flows around her like a flowing stream whenever she is transformed. It shields her eyes like a veil, protecting her from any distractions and allowing her to always think clearly and with a cool head, even in the heat of battle. It also can act as a barrier to certain elemental attacks, though it isn't strong in that regard. She can use the Veil to summon her Frost Chain at need, forming the mist into a liqueous state before it changes into its solid, metal and ice form.

It was a whirlwind romance. Kaida Ooyama is a researcher in the Inter-Dimensional Physics department of the Science Division at Mugen Academy. Standing at 5'9" she is blonde, has blue-green eyes, and a nice, strong figure. She has a no-nonsense, very straightforward kind of attitude. She would often put her work as she had a very serious nature when it came to her research.

Euri and Kaida met when Euri went to a job interview at Mugen Academy for the Entertainment Division as a drama teacher in mid-June, 2016. Euri was easily smitten with Kaida's charismatic manner and stoic charm. They quickly went on a date at Charm Coffee to get to know one another better.

Euri fell madly in love. They went on many dates and Euri was able to open up to her. She finally introduced Kaida to Hachi, her daughter from her first marriage, Delilha, who she claimed was only Matsumi's daughter, and Nobu, the son they had adopted together.

Kaida was fine with the fact that Euri had been married to a man before and didn't mind her kids.

Over time, they began to spend more and more time with one another. Kaida would often sleep over Euri's apartment, much to the amusement of Delilha, who lived with Euri. They went on short vacations and secret getaways.

Euri was so happy. She never thought she'd feel that way again, not after being divorced from Haak for nearly tens years, and the one woman she longed for was forever out of her reach.

As their Summer Romance cooled into the Autumn, Euri started to get a strange feeling deep down. An inkling of something that wasn't right.

Kaida began spending more and more time in her lab at Mugen. She began forgetting their planned dates, not calling Euri back, and blowing her off. Euri felt like Kaida was slipping away from her fingers so she did her best to hold on more even tighter.

Euri forgave Kaida when the taller woman blew up at her on Christmas. Though the vacation that followed as a way of an apology was nice, Euri felt even more isolated than ever. It seemed as though Kaida had turned into a completely different person over the course of the Winter.

Come Valentine's Day, and being ignore once again, Euri could ignore the signs no longer.

She brought up the evidence she had been collecting and confronted Kaida at her office. She found who she thought had been her new soul-mate entangled in the arms of her younger, more buxom lab assistant.

Euri was furious and broke up with her then and there. As much as she would have wanted to seek revenge on the blonde woman, Euri took her betrayal and buried it down deep with her other dark emotions.

Euri and Matsumi on a lunch date! 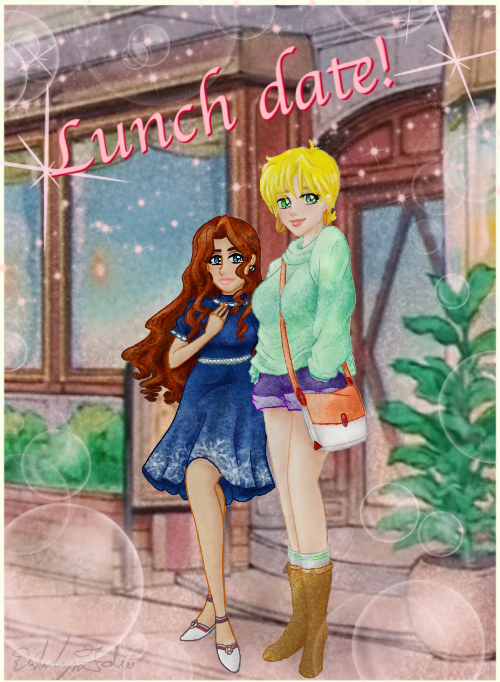