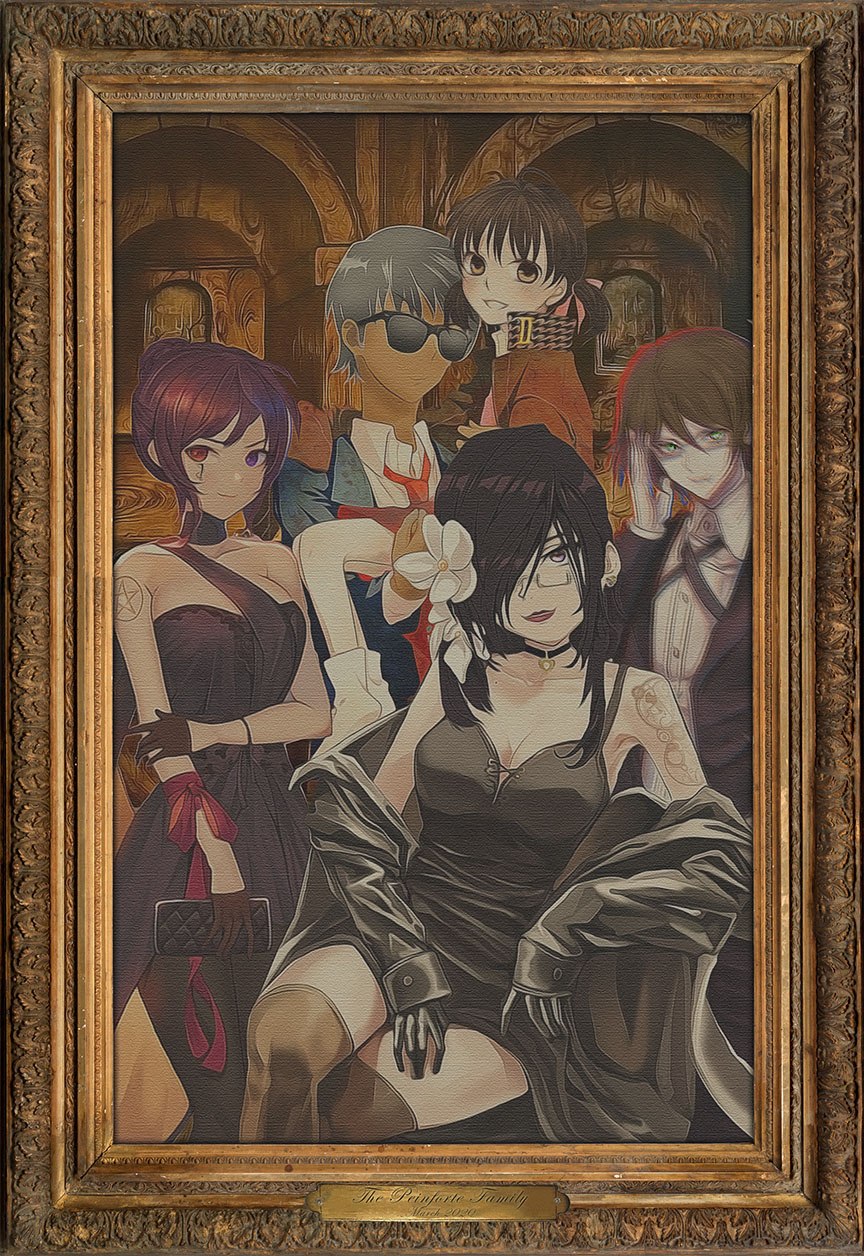 Peinforte Family of the Present Day

"The Peinforte Family tree, like all great English family trees, is more reminiscent of a creeping vine that's gotten all confused and ends up snogging itself by the back wall."
—Lady Paisley Priscilla Peinforte

Though it is universally agreed that Averil Peinforte was the founder, there were certain members of the family who told stories of a Roman centurion named Lucius Poena who was said to have encountered a terrible wyrm near the entrance of the underworld and was driven nearly mad by the sight. Paisley (the current head of the family) has called these stories "bulls**t."

It should be noted that until the year 1066, when Lord Cedric Peinforte decreed the name be changed to show loyalty to the new king, the family went by the surname of Poenaforte, from an old Latin name. During The Anarchy (1135-1153), the family began to retroactively rename their ancestors with the Peinforte spelling, in an effort to shore up their support of Stephen of Blois.

A young woman who, during the 900s, made a deal with the entity known as The King in Yellow, from which she gained a noble title and the lands which would eventually become Peinforte Estate, and as a result is the founder of the Peinforte line. It is also because of her that the family was cursed with their unusual relationship with the supernatural.

An unusual member of the Peinforte family, historical records are uncertain whether this figure was male or female. There are some suggestions that Kye had a part in the assassination of Edmund I under the orders of Edmund's brother Eadred, though this is largely just rumor.

The youngest of twin sisters, Enid always felt herself in the shadows of the elder twin, Abigail. However, after Abigail abandoned her role as heir to the Peinforte estate, Enid's hatred of her grew even more, and she eventually took drastic action. More than any other, Enid helped to increase the power base of her family. She was married three times, her first two husbands dying in mysterious circumstances.

The eldest of the twins, Abigail chose to abandon her expected destiny as heir to the Peinforte estate and instead take the religious path, becoming a nun with the name of Sister Martha. She had hoped that in doing so, she would be able to spare Enid and the family from the curse by drawing it away from their lands. However, she did not know of her sister's jealous nature, which ultimately resulted in Enid spreading false rumors to then King Cnut of Abigail's nunnery harboring his enemies. She would be killed by Cnut's soldiers along with her fellow sisters. Her decapitated head would be delivered to Enid, who would ultimately use it as the foundation of what would later become the Peinforte Manor grounds, as a final insult to her hated sibling.

The leader of the Scottish branch of the Peinfortes, Angus fought alongside King Macbeth during his final war against Edward. Angus was killed on the battlefield by his distant relative, Cedric Peinforte, in hand to hand combat. It was rumored that Angus consorted with witches and devils, and that he practiced black magic.

Lord of the Peinforte lands, he fought alongside the forces of King Edward as well as King Harold, before quickly switching his alliance to the newly crowned William. It is said in the final moments of his life he was haunted by the ghosts of all those he killed.

The daughter of Lord Cedric Peinforte, Wilfreda became possessed by a minor spirit of vengeance on her 16th birthday, during a ceremony meant to subvert the family curse. She fought during the Battle of Hastings, disguised as a man, as "The Burning Archer." Her legend inspired generations of Peinforte women to take up archery as a defensive art.

The head of the Peinforte family during The Anarchy, Edward threw his lot behind King Stephen's claim to the throne, while at the same time sending money to Empress Maud. When a noble of Stephen's court came to investigate him, he had the man poisoned, which would become a common method of murder by the family in the future. Edward also was behind the name change to it's current spelling in an effort to shore up support.

An incredibly ambitious woman, Margaret managed to make her way into the court of Richard I, influencing him from behind the scenes, as well as being the mother of his one known child, Phillip. Her efforts to try to get her son crowned king would be for naught, and after failing to try and influence John in the way she had done his brother, it is said that she placed a curse upon him in retaliation. 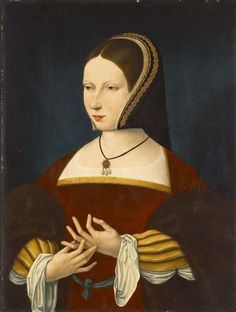 The secret mistress of the Duke of Buckingham, Cassandra helped her lover to kill the young princes Edward and Richard in the Tower of London (though it is said that she did much of the work and that it was her idea in the first place). It is rumored that she used the blood of the young heirs to complete a spell to provide further success for the family.

A member of the Royal Navy, Julian most notably captained a ship during the War against Spain. It is rumored that he operated as a pirate in secret, taking from both Spanish and British ships at will. He eventually vanished with his ship during an ill fated attempt to reach the New World. It is rumored his ship can be seen on misty nights off the coast where he used to raid. 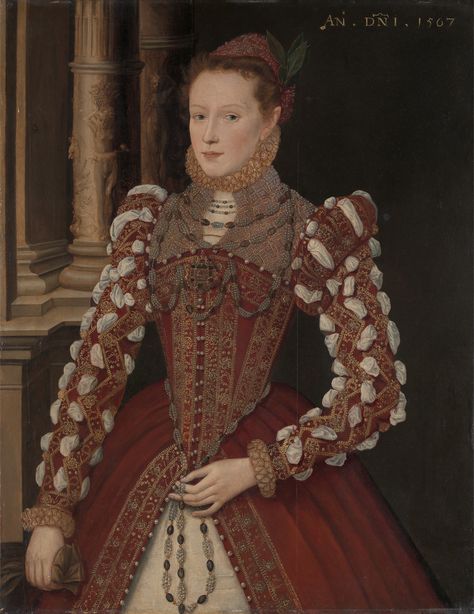 A mysterious lady of the Elizabethan Court, Eliza Peinforte acted as a patron of the arts, raising money for both Christopher Marlow (who she may have killed) as well as reportedly several rivals of Shakespeare. It is said she was present during a particularly infamous performance at The Globe and it is rumored that she sent servants to gather papers found soon after. Some have suggested the Three Witches of Macbeth are partially inspired by rumors of her. Her portrait hangs in the great hall of Peinforte Manor.

A nobleman of impeccable morals who was set to wed the "ethereally" beautiful Emma Lambert, Roger seemed to mark a turning point in the historical tide of the Peinforte line. A man of justice and character, he sought to use his family's fortune for the betterment of those around him.

His fortunes changed, however, when he came across the young Fiona Poenart, who immediately and totally captivated him to the exclusion of all else, despite her appearance and manner being substantially inferior to Emma's.

Without a care, Roger broke off his prior engagement, declaring "it was as if Destiny itself had seized his hand" and he proposed to Fiona, who accepted without hesitation.

Roger would be dead within the month and the Peinforte bloodline once again firmly lashed to its original wellspring.

Fiona Peinforte (nee Poenart) was an expert archer who fought in battle against the roundheads in the name of King Charles I.

A direct descendant of Averil Poenaforte (though this she did not know) she had married (back) into the family after being strangely drawn to Peinforte Manor, where she quickly caught the eye of Sir Roger Peinforte, captivating him so completely he quickly left his original intended, who vanished under mysterious circumstances mere weeks after Fiona's arrival.

Shortly after the marriage, Lady Peinforte brought in a new servant, Richard Maynarde (1607-1657) who was known to be a hardened criminal, after which time Sir Roger Peinforte vanished under mysterious circumstances, leaving Fiona Peinforte the head of the Peinforte line. The Peinforte reputation being what it was, no one dared investigate.

in 1621, Lady Peinforte poisoned Dorothea Remington (of Remington Grange) in retaliation for Dorothea bribing away her cook. She used a slow poison so that it appeared the once fit Dorothea had suddenly succumbed to a wasting disease, which many found unbelievable. This sparked a feud between the two families that continues to this day.

In 1635, Lady Peinforte and Richard Maynard produced a child out of wedlock who was not publicly seen until 1638, as Lady Peinforte had kept her hidden for fear of retaliation from the Remingtons.

In 1638 she carved a magnificent silver statue in her likeness named "Nemesis." Famously, after a "loud tumult", the statue seemingly vanished into thin air. Shortly thereafter, Lady Peinforte also vanished, with Richard Maynarde left behind to take care of their daughter.

There were dark whispers that Lady Peinforte never truly died, and she yet lives on, somehow.

A gentle and soft-spoken woman, Annabella attempted to "cheat" the King in Yellow by marrying into another family as soon as she could. She and her husband would eventually cross to America in 1700, where they would found the family that their new home would be named after: Collins. The Collins family, thus, is generally seen as a branch of the original British Peinforte family, albeit the black sheep branch due to the abandonment of the family name.

A young woman who saw herself as an adventurer, Flora made it her decision to explore the furthest and most mysterious reaches of the Baltic regions. She vanished without a trace in 1816 after reportedly taking a trip to Romania.

Second child of Gregory Peinforte, Andrew was a self-proclaimed magician, alchemist and student of the occult, though he hid this under the guise of studies of cryptology. He may have been a member of The Fellowship, though documentation was not clear on that fact, as well as taking part in a lengthy correspondence with one Josiah Samuel Smith. He would later leave the Peinforte Estate in 1899, after an unknown incident, never to return.

The youngest son of the Peinforte line, like his two brothers he joined the military when World War I broke out. It is said that during this time, he, along with his trusted batsman, would encounter strange occurrences on the battlefield--events he would chronicle in his war diary and of which he ever spoke again. With both of his brothers killed during the conflict, Arthur would take over the family estate, later being knighted for his valor in combat.

The son of Sir Arthur Peinforte, Arthur fought on the front lines of WWII, mostly in the European front. In 1939, he was one supposed to be of the soldiers acting as ground support against the Berlin Kagekiden, but was recalled before he could move out due to fears of scandals with his family name. He would later take part in the evacuation of Dunkirk, as well as being part of the landing at D-Day, helping to take Gold Beach.

The sister of Arthur U. Peinforte, Sylvia, like her brother, took part in the war effort. While to most she was known as a working member of the ATS, Sylvia in fact acted as an agent for the British Government as part of Operation Morganna, which used women with high spirit power and magical ability to strike against the Nazi menace. Her most famous accomplishment was her continual battles against the Nazi female mage, Kriemhild Wagner, which would ultimately end in the mage's death in a spectacular final battle. After the war, Sylvia would retire to a quiet life in the French countryside, only occasionally communicating with her family in England.