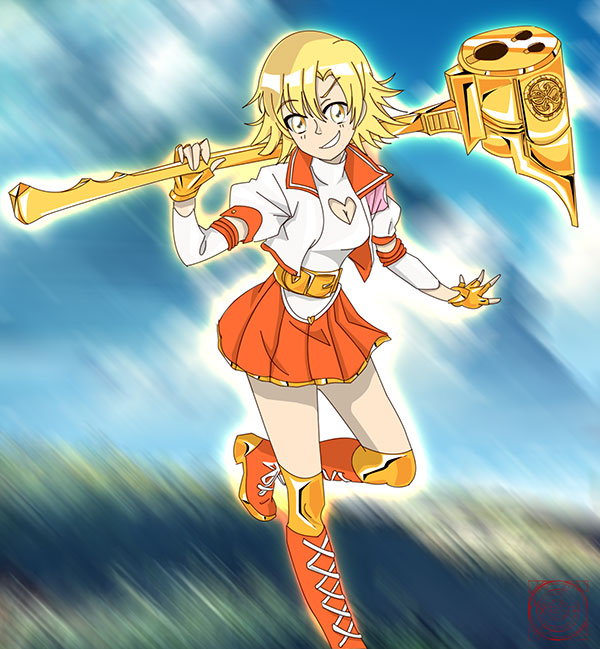 "Honestly... we might be exaggerating. It could quite possibly be that right now the people who did this are being smeared through the holes in a saltshaker while begging for Valeria's seemingly-nonexistent mercy. "
—Simon Kerrick

Allegedly created by Nizhaladax out of DNA taken from Aino Minako and Doctor Xadium which was manipulated by the Kaminoans, as a means to create a "Dark Sakura", she was actually the daughter of The Corruptor and Lady Ishtar who was given to Nizhaladax as an infant for that purpose.

Artificially aged to 13 years and filled with implanted memories, she was dropped into the Fire Plains of Venus and left to be "rescued" by Nizhaladax, who was in the guide of a wizened seer (in truth mentally projected from 2014 Tokyo across the World Tree). Under the tutelage of the woman she thought of as the "Shadowy Madwoman of the Fire Plains", she began to grow and develop in a twisted parody of Sakura's upbringing.

Encouraged to unleash her full Venusian powers, Valeria was made to transform into Sailor Venus (2.0) at the age of 14, and told never to drop the transformation. Enduring great pain and sickness, she eventually had her whole body converted into the Senshi form permanently, and mastered her powers both over light and metal as well as emotions-- both the reading and the manipulating.

She was made to master her metal control power by scouring the countryside for traces of the rare Kinamantine metal, wresting it from the ground and forging it with her will alone into the Rocket-Launching Warhammer "Obliterator-chan". This also had the side effect of developing her iron will (pun intended?) which makes her resistant to all but high-level mental manuipulation and gives her intense concentration ability.

She lived in an unfurnished cave in one of the mountains of the Maxwell Montes range.

Nizhaladax constantly challenged her young charge with philosophical tests, particularly focusing on the notion of heroism versus pragmatism. She used one such challenge-- asking if it would be right to save the home planet of the Daleks and plunge the universe into a massive Time War if it would mean that Gallifrey would eventually rise from the ashes stronger and better able to protect the universe-- to get Valeria to save planet Skaro from being destroyed by the hand of Omega, pulling a totally insane maneuever, controlling a magnetron, interposing another planet between Skaro and the Hand of Omega in the nick of time, and displacing Skaro several million light years away, saving it and setting the universe further along the course towards the Time War.

Eventually she was introduced to rei-bot, the dark counterpart of rei.bot, who had been brought to this universe by Nizhaladax in order to train her (and who would eventually kick off the Seven Swords crisis. Through her she learned mental discipline, fortitude and self-confidence to overcome even seemingly impossible odds.

Then she tipped Valeria off to the activities of the Tairon hoarde who had so ravaged the timelines of Earth 1337-B, and got her to utterly decimate the invading Tairon hoards of the 31st and 51st century, utterly obliterating the grimdark future Sakura lived through in the prime timeline. By these actions, the girl became more critical to the fabric of history, a walking nexus point.

From the very beginning Valeria has been raised to play very large, high stakes games and gambits in the fight against evil, to the point where her actions could have profound consequences for the timeline-- as Nizhaladax intended. This has the ironic effect of making her totally ignore "small fry" because they're just not seen as worthy of her attention, no matter how callous that might seem to others.

When she finally joined society, she stayed on the edges, so the Planetary Senshi and others never met her, but possibly heard of her actions by rumor. Going to university she was tormented for manipulating others with her pheromones even though she didn't mean to, and was subject to a lot of physical tormenting.

She eventually went to the past and killed her mentor when she saw the evil Nizhaladax was doing in her quest for Hazel Ninegate's Philosopher's Stone.

As of November 22nd, 2014, Valeria was stuck in a coma, her mind having withdrawn into itself after the traumatic events of the Third Nonary Game. It is speculated that she had never been affected so intimately by evil, or felt as helpless as she had been during the events of the game's climax, and that shattered her psyche utterly.

With the help of Melanie Baskerville-Vessalius, Valeria was able to face her inner self and the power of Venus, which left Lady Ishtar and challenged her for the right to hold the mantle of the planet's innate power. Coming out of the struggle victorious, she increased her power and also apparent age, casting off her old name which she knew to be false, and calling herself Valeria Victrix. 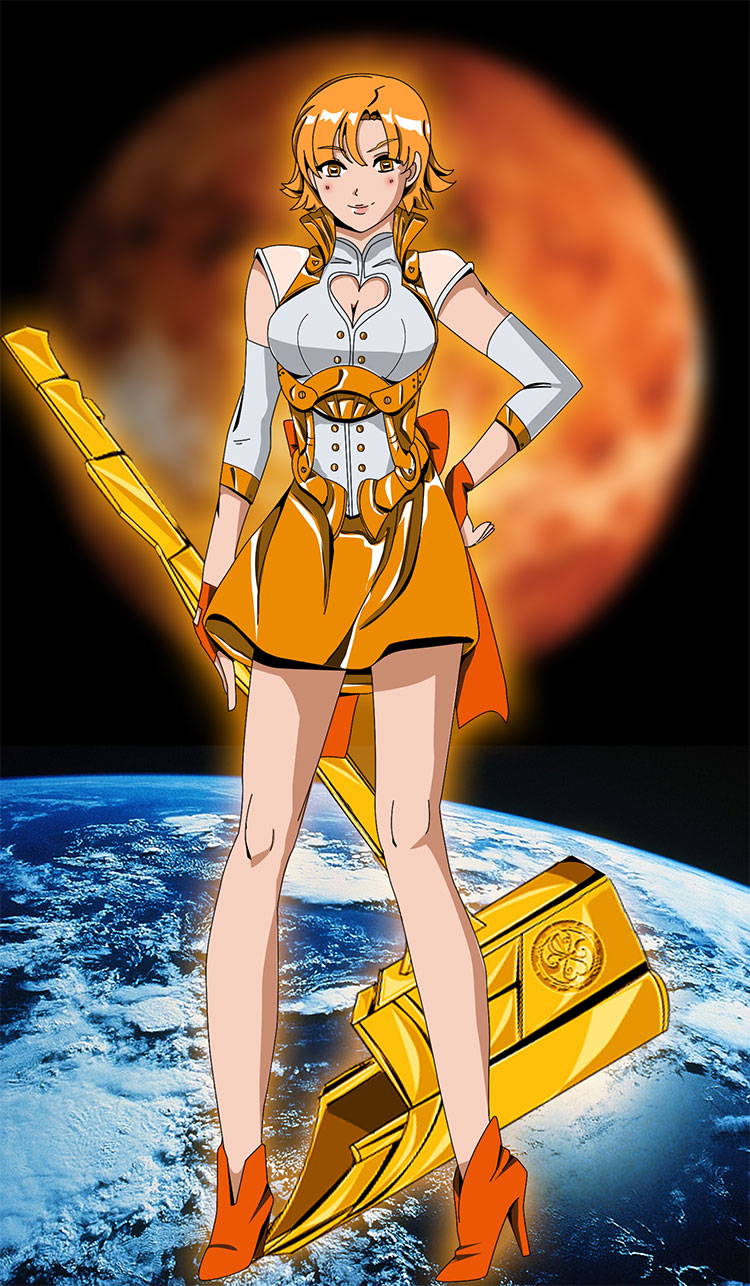 On January 7th, 2014, as part of Intern's Operation: Stormbringer, she valiantly faced off against Ashagar the Endbringer and narrowly defeated him, taking severe damage. Afterwards, she underwent a catharsis, becoming more humble about her powers, even apologizing to Sakura Xadium Aino for the way she had treated her on her return. The aftereffects of the battle with Ashagar seem to have affected her in some manner-- with it being possible that she absorbed his power as a result of the victory. Sensing her new, overflowing energy, Sakura realized that Valeria needed to train to get it under control, and placed her under rei.bot's tutelage to learn the way of Iron soul. If she masters it, she will be the first person to master Steel Fist (from rei-bot and Iron soul techniques in the same personality.

Finding a place for herself in the Cosmos

On April 27th, 2015, Sakura Xadium Aino reconciled with Valeria and passed along a message from the Sailor Corps, who had expressed interest in recruiting her. Realizing that she could put her tremendous power to best use in their service, Valeria agreed, becoming the Sailor Corps Guardian for Space Sector 2801, finally finding a place for herself in a universe that had once considered her nothing more than a surplus duplicate of Sakura.

" FOR GREAT JUSTICE! THE PRETTY SOLDIER OF AWESOME, VALERIA VICTRIX, HAS ARRIVED! "
—Valeria

"She was doing bad things to the people here, so I killed her. "
—Valeria Xadium Aino

Like her alternate universe sister, Valeria is highly intelligent and genki. She, however, becomes dangerously cold when confronted with possible evil-doers, developing an almost suffocating killing intent at those times, with a tunnel vision of focus that is almost impossible to break. She does believe strongly in crushing evil-- she just feels that killing the evil utterly is the best way to go. She subconsciously and consciously uses her Venus powers to manipulate the emotions of people around her to give her the maximum tactical edge. She does not seek out violence or killing, but will absolutely not hesitate to use it to stop her foes. She has great pride in her accomplishments and an ego to match. 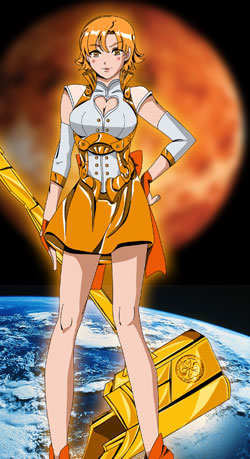 As Valeria Victrix, Valeria is much colder, more reserved and precise.... 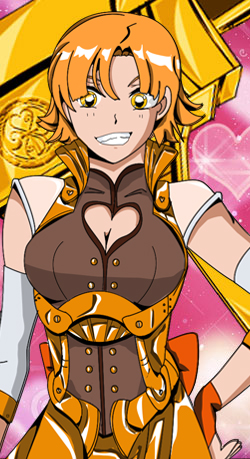 Well, she WAS, until she proved ineffective in battle against Ashagar the Destroyer, realizing she had lost the Joy d'Vivre that allowed her to triumph over impossible odds. Asking herself "why so serious?" she rededicated herself to being the soldier of Awesome.

Unlike Sakura, she has totally embraced her Venusian side, making strong use of her emotion-manipulating and reading abilities, as well as her command over light and metal. Her body is stronger than most senshi, since she adopted the full transformation very early on in life. She has some Time Lord abilities, but for the most part they are unrefined. She is a pure Sailor Senshi first and foremost. She uses her enhanced strength to casually wield her kinamantine Warhammer around like a child's toy.

She is highly inventive, and is capable of great feats of genius when it comes to determining ways to deal with her targets.

She also has a bottomless appetite.

Because of being a transformed Senshi for almost her whole life, she has already achieved the Ultra Senshi form, including the ultimate level thereof, the "Logia" form (she stole the name from the Future), where she can become light itself.

Valeria's boots, skirt, bloomers, bow, outer jacket and sleeves are all sailor fuku armor. Her vest is leather reinforced with Kinamantine both back and front.

A 300 pound Kinamantine hammer that can fire rockets and be used for rocket jumping. Valeria often throws it, linked to it by a Love-Me-Lots chain, and rides the hammer into the air. It can be transformed into a handy pocket size, making a CH CH CH CH CH sound when it shrinks and a CHU CHU CHU CHU CHU sound when it expands.

Valeria Victrix has enchanted the hammer so that only she can use it or pick it up, and it will come to her when she summons it. (Yes just like Mjolnr)

Her Nicknames for People

(She no longer uses these, having realized they were rude, and in her words "[she] was being a little shit."