First appearing at the Hotel on February 5th, 2013, ostensibly just to bear witness to the Hazel Ninegate Trial first hand, this enigma has remained since then. Speaking very little about himself, Constantine has only revealed thus far that he is from the future, and has "fallen in the cracks" formed by the increasing separation between the timelines of Earth 1337, 1337-A and 1337B.

He also revealed that he is a former Defense Attorney possibly associated with the Shadow Proclamation; he admits to having been inspired to a legal career by the actions of Franziska von Karma in the Hazel Ninegate Trial.

He has described encountering great horrors waiting to visit themselves upon the universe, but maintains the denizens of 1337-A are the best suited for handling them, stating: "When the Abyss looks deeply into our universe, it finds YOU ALL looking back into it."

At some point, an unnamed offspring of Gemini Sunrise and Doctor Xadium from an uncertain branch of the 1337 timeline was killed along with another unknown individual, his soul turned inside-out, upside down and parallel by an unknown being. This second individual, just before dying, told him to "survive" before expiring. Somehow--possibly due to the modifications that were dune to his soul, this offspring was able to latch onto the body of the dead man, and clung to life, albeit unable to move. Lost and forgotten in the chaos of the moment, he lay, paralyzed, and unable to move.

For five years, buried alive, he used pure willpower to rework his body, re-opening the chakras and neural pathways, repairing cells and enmeshing with the body, making it his own.

Thus restored, the man dug his way out, and fought his way to the being that had killed him. After a long conflict, he was able to seal the creature only by sacrificing his future timeline as a Sunrise-Xadium, and allowing himself to be cast back to 2013, where took the name John Constantine, he would have to make his way back to the future one day at a time.

Constantine as he appeared upon his first appearance.

Constantine after a regeneration

Even through his body was possessed at the time, Constantine has had constant memories of killing his alternate-universe father, Doctor Xadium, and they have eaten away at his reserve, leaving him, tired, moody and cynical. In an attempt to detach himself from his life before the incident he has taken to speaking with an affected accent and dying his hair blonde. 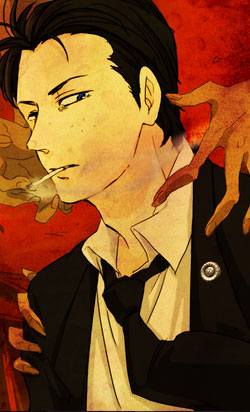 Constantine after facing down his demons on Karn

With the HOTEL facing an ever-greater array of threats from the Outside, Paisley Pythia Peinforte kidnapped the mentally-broken Constantine and, with the aid of the Sisterhood of Karn, battled through his psychoses and guilt, forcing him to realize that in the current crisis he was the only man who could possibly face the darkness and live. In the attempt, he underwent a third regeneration, which the Sisters shaped with their elixir, bringing him to back to the prime of his powers.

John Constantine has tried only two cases in his entire career. The first was when he defended Sakura Xadium Aino of murder charges in the Tairon War, and defending Prince Obsidian against the spurious charges of some members of the Time Lord High Council, as presented by Cardinak Keim on March 24, 2015.

John was killed as part of the Extinction Arc , ironically at the start of the secret mission that had first brought him back to the HOTEL back in 2013.

He is generally quiet and mild-mannered, but has odd mood swings, vacillating from zen philosophical to everyman to profound idiot. He also is capable of great empathy, but seems to be blinded by hero worship, as evinced by his reaction to Franziska von Karma, after seeing her suffering at the hands of Ninegate, somewhat shocked (despite knowing otherwise intellectually) that this giant hero of his childhood was, after all, just another human being who felt pain like everyone else. As such, he has taken an interest in her well-being.

It is hard to get a read on John's physiognomy; it fluctuates between 58% human, 29% time Lord, 13% other, and different variations thereof. This is due to being "broken" somehow in a realm perpendicular to ours. His Spirit Power is high, but utterly unaligned with our dimension ad thus almost useless in the dimension as a result; Those who sense it often get nauseous. He has a ridiculously high metabolism and is constantly eating. He has been shown to take ridiculous damage and emerge unscathed-- an ability that seems to stem from the fact that his body is constantly oscillating between a dead/alive state, and thus resetting itself to a default unscathed condition.

This changed after his forced regeneration at the hands of Nizhaldax, rendering him as mortal and vulnerable as any other Time Lord. this changed AGAIN after Constantine re-acquired his powers thanks to help from The Shadow Architect in order to counter a threat to reality as posed by Simon Kerrick.

He is an expert fighter with his cane.

John is able to spirit channel, but inexpertly, and says things quickly get out of hand when he does.

The Shadow Architect has revealed that John is capable of "Ghost Tricks"-- detaching his soul from his body and letting it travel into inanimate objects within a certain radius, controlling them-- and if he concentrates enough, sometimes he can manipulate living beings, subject to the strength of their will. He can also travel across phone lines in this form, to cover distances rapidly. These abilities were taken away from him due to his forced regeneration at the hands of Nizhaladax, but he has since recovered them thanks to the aid of the Sisterhood of Karn.

In order to prevent his body from being taken over while he leaves it, John usually uses a modl.soul pill to inhabit it with an artificial soul.