[[ As part of the preparations of Project: Prometheus, Anthony Suthers requested that Matsumi Kaze attend the proceedings as one of several special guests. While Matsumi had at first been certain of her own ability to protect herself in case of any possible problem, as time went on she soon began to have second thoughts. It was due to these thoughts that she turned to Noriko Sunrise-Xadium for help.

Taking a sample of Matsumi's DNA, Noriko traveled back 35 years to the planet Kamino, where she paid for the creation of a single clone. Growing up, the clone would be exposed to as much data on Matsumi as possible, gaining many of her memories and learning as well of the mission she was tasked with: to replace Matsumi at the Prometheus showing to keep the woman out of danger. Although the clone lacked Matsumi's senshi abilities, she inherited some of her longevity, her aging stopping when she turned 30 years old. She was as well fed samples of Dark Kingdom Chocolate, in order to match the increased weight of Matsumi (a move in order to re-register in order to slip the clone in). On the day the clone turned 35, she was put in stasis and mailed to Noriko. The Time Lady in turn delivered her to Matsumi for last minute details.

For this to work, Matsumi substituted the clone for herself two days before the showing, in order to lose all the weight she herself had gained. During this period, the clone spoke with Noriko and requested that she be given a name of her own and a new life once her mission was over.

Finally on the day of the showing, the clone joined the other special guests at the event. As nothing of threat happened, the clone returned to The Hotel, meeting with Matsumi who revealed the truth to the rest of the denizens. In fulfillment of the agreement, the clone was given an elaborate new backstory as well as a name for herself: Joanna Smithson.

While Matsumi feels uneasy around Joanna, given how closely she resembles her, she agreed to help Joanna find her way in the world, starting by sending her back to the US to see the birthplace of her genetic source and in hope that she may learn a little bit about herself in the process. She also took over the job of teaching English at Mugen Gakuen, taking over from Matsumi.

While still a bit unsure of her own existence, Joanna is slowly acclimating herself to this new life.

Growing more depressed about her own state as simply a clone, she was given a new lease on life when Paisley Pythia Peinforte used her talents to give Joanna the memory engrams of her alternative self from Earth 1337-GXP, thus making her in every sense of the word, a real person with a real past.

Born February 3, 1977 alongside her twin sister Matsumi, Jo grew up constantly close to her sibling, the two often relaying on each other for emotional support. This would change, however, in the last year of middle school. Soon after graduating, she received an invention to attend the Stockholm School for Girls. Though not wanting to leave her twin, she bowed to her parents decisions.

This separation from her twin would being a slow shift in her personality, causing her to become far more aggressive then she had once been as well as causing her to rebel against most forms of authority. As well it would be during this period of time that the girl would discover her growing spirit power, though she would hide the fact in fear. This shift made her considerably unpopular with students and teachers alike, with the exception of two girls who befriended her. Their friendship would help Jo cope with her situation and eventually the girl would go on university where she would pick up a teaching degree.

Returning home from a date with Zept, Joanna was shocked to discover a baby girl sleeping outside her apartment. She soon learned of Mango's 400 baby operation and that the infant in question contained her DNA, making her the child's mother. After a very stressful time trying to come to grips with what happened, Jo finally decided to try to embrace her role, naming the baby girl Victoria. 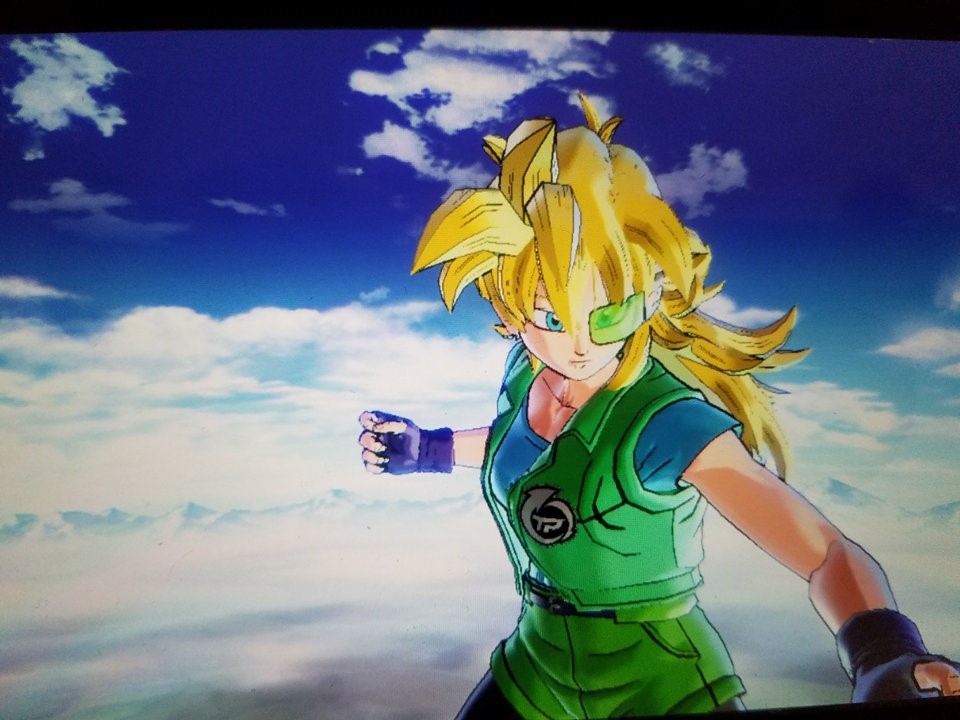 On September 28 2017, Joanna suddenly vanished from her place of work. While few knew what had happened to her, what resulted for her personally turned out to be quite the little adventure in itself. Discovering herself in a strange looking cityscape, Joanna was soon introduced to the Supreme Kai of Time, who, much to Jo's dismay, told her that her being brought to the location was a mistake and that she had actually been aiming to summon Cressida but had somehow gotten her instead. However, due to the circumstances, there would be no way to return her to personal location at least for awhile. Unhappy with this answer, Jo was persuaded however to join a group called the Time Patrolers, tasked with protecting certain moments in the timeline. Reluctantly agreeing to work for the Kai, Jo soon began to integrate herself with the group, even growing out her hair from it's usual braid to prevent it from being used as a tool against her in battle. She would also often address to the bird Tokitoki before the Supreme Kai as a means to get back at her for kidnapping her. Assigned an apartment with another time patroler named Chicori, Joanna spent some time getting used to the location, as well as meeting other patrolers assigned to the area.

After several weeks, she finally was given an assignment to correct an attempted alteration to the timeline during a battle against the Saiyan known as Radtiz, a battle during which Jo mopped the floor with him without breaking a sweat. However, during a training session against a earlier version of Tien and Yamcha, Jo began to realize she had fairly sloppy control over her own abilities, causing her often to zoom past an opponent rather then face them head on or continue punching even when the other fight had moved out of the way. Finally given the opportunity to take the advancement test, Jo's ego was quickly deflated when she was almost immediately defeated by Yamcha, a fact which left her greatly depressed. Walking back to her apartment, she overheard a few other patrolers in training talk about a new milk delivery service being put in place and realizing it might be a good way for her to gain some necessary strength, signed up for it.

Her first attempts went horribly wrong, with her managing to break the bottles before she could deliver them (to the point she took a single step and they cracked). However, she eventually succeed in her task. At the same time, as a sort of apology for "kidnapping" her, she was given a Time Phone, which allowed her to finally contact the Hotel, lifting up her spirits a bit, though she was still angry at Cressida. Having a boost of confidence, she continued to try and take the advancement test, failing at each time, though a few did take notice at the stubbornness and persistence at the attempt. She especially was noticed by Piccolo, who once more took her under his wing, seeing in her a will she had not had in a long time. After finally coming in contact with Cressida, she was stunned by the woman giving her a grand speech and wishing her well on her training (though secretly Cressida was happy to not be forced to work with the Kais). Having come to terms with what had happened, Jo decided to continue her work and training.

Jo in her Gi

While lacking her genetic source's senshi powers, Joanna has inherited her spirit energy from Matsumi. As she does not have power of Quinox within her, Joanna's spiritual power is extremely high, matching that of her grandmother Diana Caprice. Unlike her sister, there seems to be no real limit to this power, as it appears to grow stronger the madder she becomes. Jo also has learned to control her ki, allowing her to fly as well as fire them in the form of blasts from her hands.

After retraining with Piccolo, Joanna refined many of the above techniques while discarding others.