Sakuya Izayoi is one of Gensokyo’s most well-known women, instantly recognizable for her elegance, maid outfit, and bright silver hair. She’s also known for the company she keeps, which can be as much of a disadvantage to her as it is an advantage.

As the head maid of the Scarlet Devil Mansion (SDM), Sakuya controls virtually everything that goes on inside of it. The SDM employs a huge staff of Fairies, but they’re useless at their jobs: all they ever do is cook for themselves and do minor cleaning. As such, Sakuya herself has to do just about everything. This would be an impossible task if not for her ability to stop time. From an outsider’s perspective, Sakuya can walk into a messy room, stand in the middle of it, and blank out for a moment (with her eyes glowing red the entire time). Then an instant later the entire room will be cleaned up and straightened away. She’ll then leave the now-clean room and move on to the next.

Sakuya is more than just a maid, and anyone thinking she’s just around for “fanservice” would be in for an unpleasant surprise. In a fight, Sakuya is a fierce and deadly combatant as befits her other duties-–protecting Remilia Scarlet from any would-be vampire hunters. Sakuya is fast and agile, able to leap, weave, and dodge like an Olympic gymnast. She’s also never without weapons; tucked into her garter belts are several small throwing knives and she has even more hidden elsewhere on her body. In battle she can conjure up hundreds more and hurl them at her targets with tremendous speed, accuracy, and force. She can also use her time-stopping ability on top of this and many people hypothesize that this is how she can be so accurate with her throws.

Sakuya is elegant, refined, and dignified. She carries herself with a quiet pride...until someone starts suggesting that she’s actually wearing a padded bra and that she’s not really a D-cup. Or someone back at the SDM deliberately does things to make a mess (like refusing to separate the trash despite numerous signs insisting upon it). Or Meiling falls asleep outside the main gate again. Then the elegance and dignity vanishes and Sakuya goes on a rampage generally resulting in the offender(s) getting the crap beaten out of them with knives inserted into sensitive locations.

A great many rumors revolve around Sakuya as much of her history is unknown even to her. She remembers very little of her early years or even where she came from: she was already with the Scarlet Sisters and everyone else when the SDM appeared within Gensokyo, so she’s from somewhere Outside. She also hasn’t aged a day since their arrival. While Sakuya appears to be Human, that’s hardly proof that she is Human, especially since one of Remilia Scarlet’s powers is the ability to manipulate a person’s fate to the point of transforming them into a half-Youkai. It’s also been suggested that Sakuya isn’t Human at all but is some kind of Dog-Youkai (a derogatory insult aimed at her “dog-like” loyalty to Remilia). One rumor suggests that Sakuya was once a vampire hunter herself when she was a child. Another rumor (based on Eirin Yagokoro’s reactions when she first met Sakuya during “Imperishable Night”) suggests that Sakuya might actually be a Lunarian (and that she and Eirin are actually related). No one knows for certain, which only adds to Sakuya’s mystique.

One thing that is known for certain is that Sakuya is the owner of Scarlet Devil Publications, which came into existence solely to publish the Tengu-Girl Photo Album, Aya Shameimaru Edition in retaliation for Aya’s uninvited invasion of the SDM when she attempted to take pictures of everyone’s panties. Sakuya thwarted this, captured Aya, confiscated her camera (a brand new state-of-the-art digital camera too) and subjected the Tengu-girl to a most humiliating punishment involving shackles, her own camera, and knives. 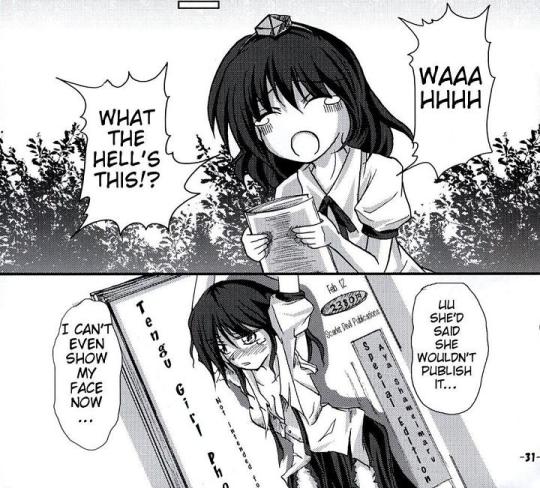 Sakuya is a close friend of the Onryo. During the events of the Gensokyo Incident she and Solarchos fought side-by-side against the mercenaries and their combat-droids. She has great respect for his abilities as a soldier and the respect is mutual, as Solarchos has likened Sakuya’s combat skills to that of an Eldar Howling Banshee: the same speed, grace, and superlative skill. With the rest of the Onryo’s family, Sakuya’s attitudes are mixed. With Inu-Kit she is cordial and polite at all times, especially since Inu-Kit is nobility. The Kits can be a handful for her, though, especially Catriona and Alexianna, who she sometimes finds impossible to keep up with. AnTilZha, however, is a delightful exception in Sakuya’s opinion. Quiet, observant, and well-behaved, little AnTil is easy for Sakuya to deal with, so much so that she will frequently allow him to assist with her duties (he’s more helpful than any of the Fairy-maids, that’s for sure). It was Sakuya that ultimately gave AnTilZha the title of “the Well-Mannered Foxboy,” a title she feels was much deserved.