From Whatis
(Redirected from Sailor Sinope)
Jump to: navigation, search

Tomoko Allison is the Jupiter Satellite Senshi Sinope, the Senshi of the Shadows for the Jovians. A generally easy going young lady, but has a pretty bad attitude if set off.

"I'm the best of both countries, but I can be your worse f(censored)en nightmare if you push me further."

Before the Sailor Senshi

Tomoko Allison was born in Yokosuka, Japan to a American male sailor named Richard Allison and a traditional Japanese female named Ai Kashiwagi. Her father, who rose to the position of Chief Engineer on an American destroyer, made sure he was there for his daughter's birth despite the trouble that was brewing when Queen Beryl and Firestar launched their assault on the Kanto plain. Richard remained in Yokosuka, allowing Tomoko a chance to have some stability even though she was a Navy brat.

Tomoko grew up with a love for hiding, and her mother noticed this. Ai's father, Tomoko's grandfather, was well trained in the art of ninjitsu and it would seem that her daughter was developing a natural talent.

Hitomi and the Temple of Tokugawa

Tomoko went to The Hotel, playing a crazy game of hide and seek with her best friend. She was able to blend into the shadows of the bar area of the Hotel quite easily, but Coral's tracking skills were quite good. She watched as Coral Ellis asked some of the patrons of the HOTEL if they had seen the one hiding amongst the shadows. All of them said they had not, unfortunately, but there was a patron that had seen Tomoko. Ryoko Nasino was hiding in her own shadow, and the Ninja Senshi was the Queen of the Shadows. Tomoko had no idea though that she had been found as she watched what transpired. Coral started to stutter around David O`Cain, a situation that perplexed Tomoko, as Coral didn't let anything bother her. Then when Juniper Aki touched Coral, Coral stood up and then collapsed, causing Tomoko to break her cover and catch her friend.

Juniper was a doctor and explained what happened to her. Helping Juniper carrying the unconscious Coral into Suite 1808, she was quite impressed with what she saw. And then she met a great beauty... Makoto Kino, Queen of Jupiter and Sailor Jupiter. Tomoko, however, didn't believe the part about her being a Queen, even though she was so beautiful, she definitely looked the part in her eyes. And she believed the part about her being a Sailor Senshi even less... until Makoto touched her, and it was like something in Tomoko's brain snapped and a door got kicked open. Tomoko had already put Coral on the bed and when she had gained her memories, immediately went to one knee and bowed to the Queen.

Then Kevin Junia walked into the room and immediately she gasped. Was this Jupiter Knight in front of her, the chosen champion of Jupiter? He and the other Sailor Knights were the subject of her daydreams, both in her previous life and the current one. She was often jokingly referred to as the Daydreaming Senshi by her fellow Satellites in the past, and it seemed her personality hadn't changed too much. Her transformation wand appeared in front of her and she gratefully accepted it. No one had to explain to her the consequences of accepting or refusing it, as she was ready to embrace her duty again.

While Coral was still down and out, Tomoko went down to the bar area of the HOTEL and one of the occupants was handing out candy. She noticed that both Sean Collins and Kevin were downstairs, but fell into her daydreams about the two Sailor Knights and didn't see their apprehension to the very candy she was to partake of. As soon as she was about to eat it, Kevin realized and tried to warn her off, but too late. She ate it and vouched for it... and a few minutes later she had shrunk from teenage girl to little baby. She was scooped up by her liege, but soon after passed off to Juniper after making a... mess. However, Kevin and Makoto helped Juniper take care of the baby Tomoko.

The effects of the candy would only last for 24 hours, and while Kevin was holding her in his arms, she reverted back to her normal size and age. Her clothes, however, did not cover her, as they did not grow with her. Kevin was now holding a very naked and very shocked teenager in his hands. All the inhabitants of 1808 saw this and immediately knew what was about to happen. The King calmly set her down, feet first and slowly backed away from the ever increasingly angered Tomoko. While still in her birthday suit, the redness of her anger covered her from head to toe, and she immediately grabbed the nearest item and tossed it at Kevin. She started yelling "ecchi" and "pervert" at him as she continued to toss items at him, causing him to immediately dash for the door and leap over the balcony, an 18 story drop. While Tomoko was shocked to see this, her anger was still very much prevalent.

Juniper and Makoto had some clothes nearby, a plain, loose fitting t-shirt and some track shorts, which she quickly put on and gave chase. Juniper and Makoto were both in shock at this moment, and this situation actually snapped Coral out of her self-loathing funk for a few seconds so that she could laugh. Tomoko was about to tackle and pummel her King, when Yuri Junia, the daughter of Kevin and Makoto, wrapped her arms around the irate teenager's waist to stop the potential assault. After some explanations, Tomoko finally calmed down and relaxed. While she was still embarrassed at being revealed to Kevin, especially in such a manner, he gave her some advice. He told her that she was quite beautiful and not to have self doubts, and she was every but as worthy of being with one of the Sailor Knights or anyone else she chose. Tomoko's heart skipped a beat at such advice and gained a bit of actual love for him and a lot of admiration. He was a worthy person to serve, and thought that her Queen was very lucky indeed to be the chosen one of the King.

She swore she would fight hard for those two, especially realizing that they took care of her in her time of greatest need... as a baby. She also swore not to eat questionable candy again, especially in the HOTEL.

The Shadow of Jupiter

She and Coral, who had her own situation to work out during Tomoko's baby time, were going to get their first mission. Tomoko looked forward to training, but Kevin wanted her to go to a fashion show in the Ginza District to help her feel better... about the "peep show." It was also part of another objective... 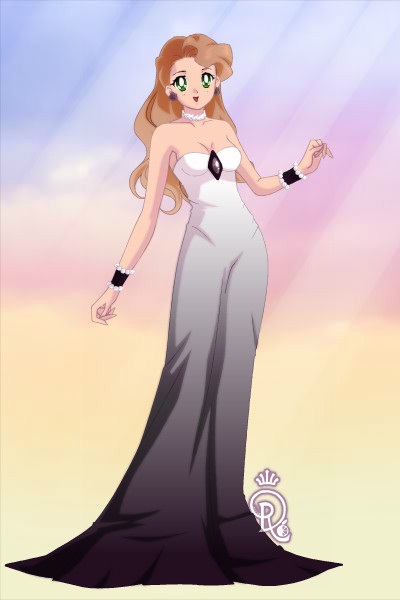