Hikaru is a female saint in the service of Athena, who fights for the honor of the goddess and to protect those who worship her.

Hikaru's past is unknown even to her. As far as she has been told, she was brought to the Sora Orphanage as an infant by a mysterious man. Growing up, she was a cheerful, if a lonely child and endeared herself to many of the staff. She especially bonded with several of the other orphans as well as the daughter of building's head, Akari Shu. A bit of a tom-boy, Hikaru often would be found climbing the trees just behind the building. She also had a love of animals , which seemed to be drawn to her just the same. Her most traumatizing moment as a child came when she tried to help a stray dog but accidentally spooked it. As a result, the animal ran into the road and got killed after being hit by a car. After this, she hesitated often when it came to helping others.

To become a Saint

When she was about 6, a man arrived claiming to be the representative of a company offering to adopt one of the children, if they would be willing to take part in training which would help in protecting the world. Though the owner of the orphanage was taken aback by such a strange proposal, she was eventually won over by the man’s earnestness and promise that no harm would come to the child. Most of the children were unwilling, but Hikaru, partially due to the other children teasing her on the fact that she was the most likely to volunteer and her own wish to conquer her fears, stepped forward, wanting to go with him. The man himself was somewhat unimpressed and less enthusiastic by this, but ultimately agreed, taking Hikaru away.

Flown to the island of Rhodes, the young Hikaru was placed under the tutelage of Southern Cross Delios, who began to teach the girl in the ways of the saints. Hikaru was forced to go through the “Path of the Sun”, a gauntlet of mirrors and heated stones which lead to an abandoned fortress where the Phaeton Clothe was hidden. The training was harsh and tough for the girl, her tutor forcing her to live on the bare minimum of necessities. She would sleep on a bed of hay and would often have to collect her own food when she could manage, made even more difficult by the numerous goats which would often try to get close to her. Never the less, she continued to push herself towards the goal, something which impressed her tutor. Eventually, at the age of 13, Hikaru succeeded in breaking through to the inner chambers of the fortress and collect the Phaeton Cloth. Given the task to return to Japan to serve the goddess, Hikaru headed back to Japan, with only a single address to go by.

The Home of Heroes

Hiding on board a ship headed to Tokyo, after many days she finally arrived at the address that had been given to her. Much to her surprise, what seemed to be an ordinary house turned out to be a vast Hotel within, and after following instructions which had been given to her ahead of time, she took one of the rooms closest to a group of girls who had originally come from Ancient Greece but now lived in the present day. Settling into her new life and registering at a local middle school, Hikaru set about trying to fulfill her duties as a Saint of Athena.

Hikaru is one of the Saints of Athena and thus has been trained in the manipulation of Cosmos or the energy that permeates the universe since creation. This ability has for Hikaru, like all Saints, given her natural superhuman strength and agility, though much of these powers have to be accessed by the use of her clothe. Her Cosmos tends to manifests itself in the form of heat and light. She also has for some reason an empathetic connection to animal life, which tends to manifests itself as beasts of all sorts following and giving attention to her.

As the user of the Phaethon Cloth, Hikaru has several attacks that she utilizes:

Hikaru is the holder of the Phaethon Cloth, an armor based on the horse which pulls the chariot of Eos, the dawn and a former constellation in it's own right which is now part of the existing constellation of Auriga. When not in use, the cloth takes the form of a horned horse. 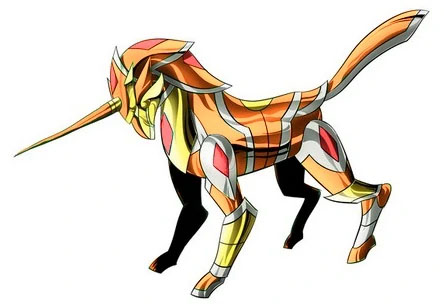