While not an inhuman race, the Baskervilles are not grouped with normal humans. A Baskerville is a person who has become miserable in life, and is chosen by the Abyss as a guardian. They are characterized with the ability to heal from injuries, even life threatening ones, even though the injury will still be apparent. If asked, any Baskerville will explain that they constantly see a barrage of small lights in their field of view. These lights are the power of the Abyss present in the real world which they alone can see.

They operate as a family unit, despite the fact that most of the Baskervilles are actually unrelated. They protect each other, and, most importantly, they protect their master, Glen.

Lacie Baskerville- The namesake of Jack and Lottie's oldest child, the mother of the Alice twins, and the spark behind Jack's insanity over 200 years ago

The Will of the Abyss

Also known in the box as the White Rabbit Plush, this seemingly charming young girl is the power behind the Abyss. She was born when her mother, the Lacie that Jack and Lottie's daughter is named after, was cast into the Abyss as a Child of Misfortune (see below). Her sin as this demonic child was not to spread to her children, with whom she was pregnant at the time of her death. This girl, also using the name Alice like her sister, was the child to remain at the Core of the Abyss. The term "Will of the Abyss" was coined by Jack himself soon after finding out that Lacie's children had been twins. Lacie had always believed that the Abyss had a sentinent mind, and often times told her brother Oswald and their Glen mentor that she liked speaking to this being. After Lacie died, one of her twins became one with this Core, taking on the form we know today. The other twin was released back into their world, living on the Baskerville property until she died in the Tragedy.

The Child of Misfortune

Among the Baskervilles, there is a child of misfortune, or a person born with red eyes. These children are seen as demonic in nature and are said to bring terrible luck to the world. As part of his ascension ceremony at the final chain transfer, Glen, who usually has some tie with this demonic child, casts them into the Abyss to bring balance to the world.

The title of 'Glen' is given to a chosen male Baskerville with a (usually blood) tie to a child of misfortune. Over the course of roughly 20 years (as Glen is chosen as a child), the young man is trained and groomed for the position by the current Glen of his time. The process begins with the introduction ceremony, where the young boy is introduced to society as the next Glen, and given the first of five Chains: Raven, Dodo, Jabberwock, Gryphon, and Owl. Every few years, the next Chain is transferred, and once the final Chain passes to the new Glen, he officially gains his title and faces his final task and first as Glen: Rid the world of the child of misfortune he's tied to. 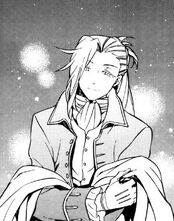 Little is known about this Glen, though it is supposed that he is the father of the Alice twins. Through experimentation to see if he could give the Core of the Abyss a physical form, he claims to have gotten his successor's sister Lacie pregnant for the sake of seeing if her child (as he did not know that she would bear twins) would be able to give the Core its form. He did not live to see the other twin, nor did he live to see what Lacie's death would eventually lead to.

Though there are several other Glens after him, the Glen currently residing in the Hotel is Oswald, the Glen of Jack and Lottie's original time.

As with all of his predecessors, Oswald had his own child of misfortune. She was his sister Lacie, and upon his rise to the head of the house, he was forced to assert his control over the Abyss by casting her to her death there.

Unbeknownst to him, his sister had been pregnant at the time of her death, resulting in her body being destroyed by the Abyss, but the twins she carried to be raised by the Abyss itself, nurtured to full term and them immediately aged to twelve by the power of the world they resided in.

The living Glen following Jack and Lottie's first century in the Abyss was a 16 year old servant named Leo, who did not know what his future role would be as the head of the house. Having lost his mother at a young age to a Chain attack, Leo was taken to an orphanage run by the Nightray family, one of the noble houses running the country after the fall of Sablier. It is unknown who Leo's Child of Misfortune was, but the loss of his closest friend and master Elliot Nightray is believed to be what triggered the emotional instability necessary to identify Leo as Glen.

The second son of modern Lacie, Logan was identified as the new Glen at a very young age when it took Glen and only Glen to console him as an infant. Logan was very attached to his master, even more so than his mother and her siblings had been. It was when Logan took a nasty fall down the stairs and stood back up with almost no injury that Lacie finally figured out that her son was a Baskerville, and his attachment to her beloved uncle meant that he would one day take his place. Logan had no Child of Misfortune, though he gained his title when his beloved mentor and grandparents were killed by Alasdair's family.

Martin was Logan's oldest son and the first in a string of beloved children he had with his wife. His appointment, while not surprising retrospect, was unprecedented in his family. Glen had never before been allowed to have a family, and no one knew if the title would pass down the line. Though not initially in the line to be Glen, Martin gained the title when the remaining Baskervilles were forced to kill the Glen that succeeded Logan, as he'd decimated the noble families by killing the Baskervilles with families (see Lacie's wiki page). Witnessing the massacre of his family and friends, along with the death of his father's successor caused his eventual rise to the title of "Glen".

Contracting with a Chain

As already seen in the SubSen multiverse, Chains are creatures originating in the Abyss of differing shapes, sizes, attitudes, and backgrounds. In order for a Chain to be released from the Abyss and retain its presence there, it must be contracted to a willing human. There are three different ways in which a person may contract, though some may only do so if they meet specific qualifications.

According to Pandora, the organization founded by Jack in their homeland to control the power of the Abyss in their world, there were many who, out of misery and grief, were found by Chains looking to seek power outside of the Abyss. It requires direct absorption of the Chain's blood (usually by drinking). These unlucky men, women, and children would be branded on the left side of their chest by a circular insignia, which looks almost like a clock set to 12. This is the seal of the illegal contractor. As the wielder uses the power of their Chain, the hour hand turns. With each "hour" marked on the seal, the Contractor absorbs their Chain's abilities and weaknesses, including pain. Upon full rotation of the seal, the wielder and Chain will be sent to the center of the Abyss, where they meet their fate at the hands of the Will.

Members of Pandora itself also hold their own Contracts. However, their contract is completed using a less dangerous method, by which the wielder instead sets the seal of the contractor in a mirror by dripping the blood transfer there. This tiny item is kept on the person at all times and though weaker, the Chain is still able to act through its contractor's will. There is no hand to the seal on the mirror, and the contractor will not be sent to the Abyss as a result. Some known side effects also include enlongated youth, though the body still ages and usually the contractor will still die of old age despite still looking the same as they did upon making the contract.

Though Pandora's blood mirrors are the "officially" accepted method of contracting, the original, and only legitimate form of contract belongs solely to the Baskervilles. As mercenaries chosen directly by the Abyss, a Baskerville holds the right to obtain a Chain. Like an illegal contractor, they bear the seal on their body, but it is without hands, like those of Pandora's mirrors.

Known Chains in the Hotel

Oz- A small plush rabbit when his soul is not present, Oz is Jack's Chain. He's often times seen being snuggled by Melanie or chewed on by Lily, but is always happy to be a part of the family again.

Known Baskervilles at the Hotel

Lacie- LV : Though not originally born a Baskerville, Lacie half-Baskerville blood was completed by the Will of the Abyss as a gift to avoid having to face the devastating loss of Alasdair again

Alasdair Vessalius- ApothecaryAssistant : Though not born a Baskerville, Alasdair was made one as a gift to Lacie so that she would never have to face losing him again

Lily and Vincent: The half-Baskerville children of Jack and Lottie born in Paris after the couple arrived in the 21st century

Alice- Twin sister to the Will of the Abyss, Alice was born in the Abyss, then lived in the outside world in Jack and Lottie's original time (100 years before their marriage). She took on the form of B.Rabbit for a hundred years following her death before finding out that she had never been meant to be a chain, but was, in fact, Glen's niece. 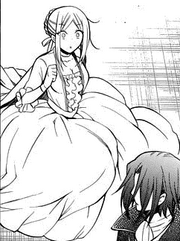